At the events in which we minister, including fairs, care centers, lawn chair nights, senior meal sites, and senior centers, we honor the veterans by asking them to stand and announce their name, what branch of the military they served in, and when.  We also give these great men and women small flags as a token of appreciation for their service.  We sing patriot songs at the events as an additional way to honor the veterans.

The military is close to our heart as Roy (see picture below) served in the Navy from 1966-1971 during the Viet Nam war.  He was burned from head to toe when a steam water main exploded as he stepped over it.  He was healed from those wounds, and we are very thankful that he is here today to be with his family and minister the gospel to those lost.

Roy further serves his country and the state of Iowa through his job.  Roy started with the Iowa Department of Corrections in 1978 and continues to work there to this day as a Parole Officer with the Fifth Judicial District.  In 2011, Roy was appointed to the office of the Juvenile Justice Advisory Council.

Cathy's father (see picture below) served in the US Marine Corp during WWII.  His platoon was stationed on an island in the South Pacific. "Big Jim" was left behind to dig the latrine because he had gotten smart-mouthed with his superior officer.  The platoon went out to find the enemy.  Only one man returned; all the others were ambushed and killed.  Cathy's mother, Georgia, was a Wave in the Navy during WWII.  Cathy's brother, Jimmy, was in the Navy during the Viet Nam conflict.

Roy's father (see picture below), Andy, was in WWII and served in the Navy as a mechanist mate.  He operated the turbines and other parts of the ship that would make it move through the water. He was under almost constant fire.  One story we remember Andy relating is that each time their ship crossed the equator, they would do something funny on the ship's deck.  Those men who had not previously crossed the equator would be beaten with straw brooms.  No injuries were sustained. 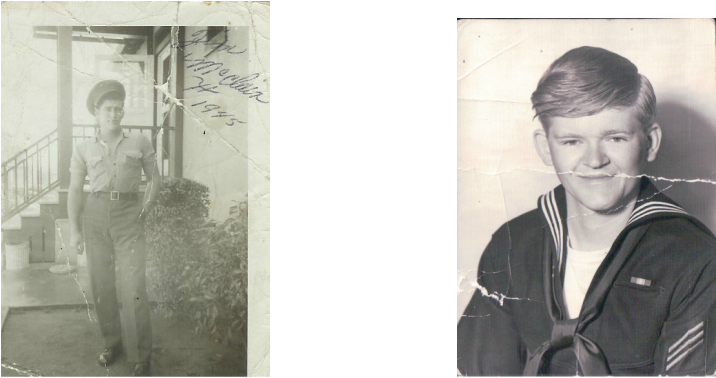 (Left to Right) Big Jim, Jimmy
A letter to our veterans - Thank you for your service.

I wanted to take a moment out of my day to say “Thank You.”  I truly appreciate that you risked your life and put your life on hold to ensure all Americans and people of other countries less fortunate, are free of violence, hatred, and terrorism. I don’t think we, as Americans, say thank you enough to those who serve or have served in the military.  Being “free” is never really free when men and women are willing to die for their country so we can have freedom of religion, speech, and other blessings we take for granted.

Even though it may appear you are forgotten, there are Americans like my family and me, who really do appreciate you.  We always tell those who serve a simple “Thank you for your service,” and we mean it from our heart.  We pray for the safety of our service men and women, law enforcement, emergency services, and any who are in harm’s way.

My father served in the Navy during Vietnam.  He was aboard a ship when they were under fire. As he stepped over a hot steam line, it exploded, causing the steam to burn his body from his neck to his ankles.  His skin turned black. He was strapped to a bed for two days while he was in shock with no help from anyone, because they couldn’t help him while under fire. Later, as he began to heal, he peeled his burnt skin off with a pencil.  My mother prayed for him every day while he was in the service.

My maternal grandfather was in the U. S. Marines. My mother’s brother and my paternal grandfather were in the Navy.  My maternal grandmother was a Wave.  We understand the hardships of being away from your family and what you give of yourself on a daily basis.
As a Christian, I have to tell you about the love Jesus gives to you, if you are willing to accept Him.  The only way to find true peace is through Him.  John 3:16-18 says “For God so loved the world that He gave His only begotten Son, that whoever believes in Him, should not perish but have everlasting life. For God did not send His Son into the world to condemn the world, but that the world through Him might be saved.  He who believes in Him is not condemned, but who does not believe is condemned already, because he has not believed in the name of the only begotten Son of God.”

I am not going to preach to you in this letter, but I would not be doing what God has called me to do if I didn’t take this opportunity to tell you about Him.  We tend to think about life as we live it, not what it will be after we leave this earth.  We are three parts: the body we live in, the soul that gives us feelings and emotions, and the spirit that never dies and connects us to God if we choose Him.  We are all born separated from God because Adam sinned.  We are born after his similitude.  If you chose Jesus in this life, after you die, you will be with Him forever. Jesus gives every person a choice.  It isn’t about how good you are or how you live your life.  Jesus died that we might live forever. If you want to accept Jesus, just pray now.

As I close this letter, I again want to thank you for all you do for us.  You are the True Hero.  Thank you for giving everything for us while you ask for nothing in return.

Julie
From the Heart Ministries